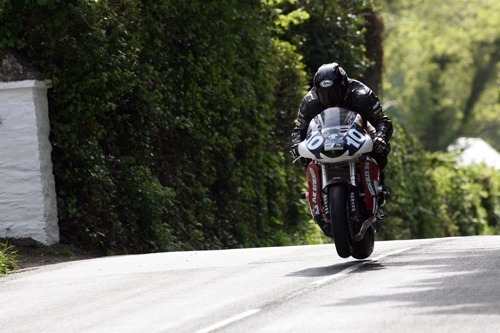 One of the most famous motorbike races in the world, the Isle of Man TT is a mecca for all those who love the sights, sounds and smells of two and four-stroke engines! For several years now, it has also become the world’s primary race venue for electric powered motorbikes, thanks to the ‘TT Zero’, an event for race motorcycles with zero carbon emissions that runs alongside the traditional TT. Support from the Isle of Man government in the form of a 10,000euro annual prize fund served to kick-start the competition back in 2010, and now with an ever increasing line-up of entrants the event regularly pits prototype electric bikes from several research organisations against numerous professional teams.

Among the competitors for 2014’s race on 4th June will be Ohio State University’s ‘Buckeye Current’ Electric Motorcycle. The team entered the 2013 race with experienced electric motorcycle rider Rob Barber in the seat and came third out of the 10 teams that started the race. For 2014, their goal is to beat their record speed of 90.4 mph, as well as pick up another place on the podium!

With this objective in mind, the bike has undergone a complete revamp for 2014, with many of the body parts being redesigned to lose weight. However, making the bike lighter only goes so far; optimising the existing AEE batteries, cooling pack and motor controller were all priorities for rework. In particular, the data acquisition system has been completely redesigned in order to prevent communication dropout between the drive control and motor controller.

The team’s recent electrical developments include the addition of a 12V monitoring circuit that will protect the battery, a ‘magic CAN node’ that allows virtually any sensor to be quickly and easily integrated into the CAN bus and its data made available for logging, plus a new battery management board. Meanwhile, the team’s CAN datalogger code has been optimised and code has been written for the rider display and drive controls.

Data on how the most important components of the bike are performing is crucial. For this, a Kvaser Eagle was donated, which has been used in combination with the team’s existing Kvaser Memorator Professional datalogger and TKE’s CANtrace software, which decodes the CAN signals in real-time. Commented Nathan Lord, the electrical team leader: “The Memorator is a very nice way of converting raw CAN to a decoded signal. The automatic dbc file format conversion means there’s not too much post-processing to do. The new event features of the Eagle have also been useful, as is the LED display to tell when it’s datalogging.” The team had an older model Memorator with a 1GB SD card, which didn’t provide enough data capacity for their evolving needs. Eagle takes up to a 32GB card, providing headroom for a couple of weeks of recording time if required.

A global picture of performance

Battery usage, cooling pack temperature, lean angles, suspension data, wheel speed, torque, acceleration and braking are among the parameters gathered by the dataloggers – in short, as many data points as possible to give a global picture of the bike’s performance. The small size and flexible cabling of the Kvaser Eagle is highly valued as the unit is tucked under the handlebars when the bike undergoes testing. Whilst this data isn’t available live, the team has developed a tailor-made on board display that gives the rider access to information such as motor current, remaining amp hours and battery voltage.

Buckeye Current’s RW2.X (the latest version of the bike) promises to be more than competitive.  With 70 horsepower, operating at 450 volts and holding the same amount of energy as a Chevrolet Volt, the team believes that it has ‘a good chance of achieving 90 miles per hour average around the course.’ For a team that was set up to provide students from Ohio State’s Center for Automotive Research with the experience of building an electric motorcycle for competitive racing, Buckeye Current has already stunned the racing community and beyond with its achievements, and on an incredibly limited budget. We wish them continued success in 2014.
To find out more or donate, please visit http://current.osu.edu/