1.1 Reach SVHC: The European Union’s REACH Directive (EC 1907/2006) is designed to regulate the Registration, Evaluation, Authorization and Restriction of Chemical Substances. REACH legislation was finalized in December 2006 and has been in effect since June 2007.

1.2 ROHS: RoHS stands for Restriction of Hazardous Substances and impacts the entire electronics industry and many electrical products as well. The original RoHS, also known as Directive 2002/95/EC, originated in the European Union in 2002 and restricts the use of six hazardous materials found in electrical and electronic products. All applicable products in the EU market since July 1, 2006 must pass RoHS compliance.

Directive 2011/65/EU was published in 2011 by the EU, which is known as RoHS-Recast or RoHS 2. RoHS 2 includes a CE-marking directive, with RoHS compliance now being required for CE marking of products. RoHS 2 also added Categories 8 and 9, and has additional compliance recordkeeping requirements.

Directive 2015/863 was published in 2015 by the EU, which is known as RoHS 3. RoHS 3 adds four additional restricted substances (phthalates) to the list of six.

1.3 CFSI: In 2010, the U.S. Dodd-Frank Wall Street Reform and Consumer Protection Act was passed concerning “conflict minerals” originating from the Democratic Republic of the Congo (DRC) or adjoining countries. The SEC published final rules associated with the disclosure of the source of conflict minerals by U.S. publicly traded companies (see the rules at http://www.sec.gov/rules/final/2012/34-67716.pdf). The rules reference the OECD Due Diligence Guidance for Responsible Supply Chains of Minerals from Conflict-Affected and High-Risk Areas, (http://www.oecd.org/daf/inv/mne/GuidanceEdition2.pdf), which guides suppliers to establish policies, due diligence frameworks and management systems.

1.4 CALIFORNIA PROPOSITION 65: The California Proposition 65 establishes a list of chemicals which the state of California’s risk assessment process has determined to present a risk of cancer, birth defects or other reproductive harm. The California Proposition 65 chemical list can be found at http://www.oehha.ca.gov/prop65/prop65_list/files/P65single01032014.pdf and general information can be found at http://www.p65warnings.ca.gov/.

1.6 WEEE: The WEEE symbol on the product indicates that the product must not be disposed of with normal household waste. Instead, such marked waste equipment must be disposed of by arranging to return to a designated collection point for the recycling of waste electrical and electronic equipment. Separating and recycling this waste equipment at time of disposal will help to conserve natural resources and ensure that the equipment is recycled in a manner that protects human health and the environment

1.7 EU WASTE FRAMEWORK DIRECTIVE
Directive 2008/98/EC sets the basic concepts and definitions related to waste management, such as definitions of waste, recycling, recovery. It explains when waste ceases to be waste and becomes a secondary raw material (so called end-of-waste criteria), and how to distinguish between waste and by-products. The substances listed in the SCIP database are the same as the ones listed in the REACH SVHC list.

In an effort to address the requirements of the REACH regulation and the Conflict-Free Sourcing Initiative and ensure a reliable ongoing supply of Kvaser parts, Kvaser has contacted suppliers to confirm all necessary registration of in-scope substances in formulations, preparations, materials or articles be completed by the REACH and CFSI deadlines. In addition, suppliers have been requested to assess the potential presence of Substances of Very High Concern (SVHC).

2.1 REACH SVHC: The 209 SVHC substances listed here are not intentionally added or used in the manufacture of Kvaser products as of June 25, 2020.

2.3 CFSI: In Kvaser’s products, there are less than 1% by weight of Tantulum, Tin and Gold. Based upon information provided by our suppliers, we do not knowingly use metals derived from the “Conflict Region” in our products.

2.4 CALIFORNIA PROPOSITION 65: Kvaser products may contain some of the listed substances in the California’s Safe Drinking Water & Toxic Enforcement Act of 1986, commonly known as California Proposition 65. Kvaser products can expose you to chemicals including methanol, which is known to the State of California to cause birth defects or other reproductive harm.

2.6 WEEE: Kvaser offers our customers the opportunity to return products at the end of their functional lives to Kvaser for recycling, qualifying products are marked with the WEEE symbol shown below. 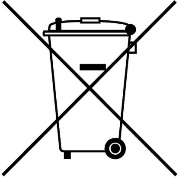 2.7 EU WASTE FRAMEWORK DIRECTIVE
Kvaser does not add any of the substances listed in the SCIP database to their products. Kvaser is therefore compliant with the EU WFD Directive 2008/98/EC.

For all Kvaser hardware products: