Tackling telemetry with the Blackbird interface 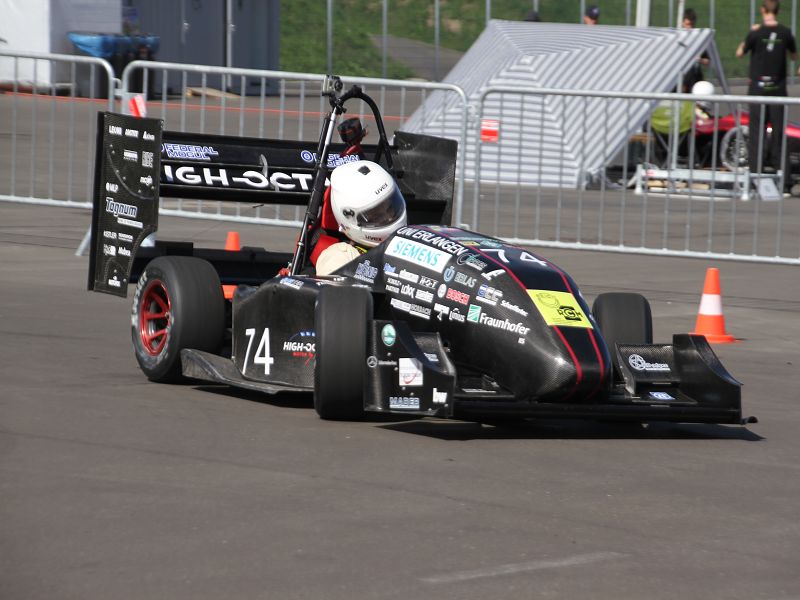 Billed as ‘the’ testing ground for the next generation of world-class engineers, Formula Student challenges university student teams from around the world to design and build a single-seat racing car, which is then put to the test at famous circuits around the world, including Silverstone in the UK. The annual competition is not just about building a car that goes fast – there are both static and dynamic events to test the technical and business acumen of the teams.

Among the 2012 competitors was ‘High-Octane Motorsports’, a 50-strong team from the University of Erlangen-Nuremberg in Germany. In 2011 and 2012, High Octane won awards for the “Most Innovative Powertrain”, so the pressure was on to maintain and build upon the team’s impressive reputation in 2012.

Keeping the same powertrain and engine (an Aprilia vee-twin motorcycle engine) from the 2011 model, for 2012 the team enhanced the gear change mechanism and rebuilt the engine, adding amongst others, their own custom built pistons, a revised combustion chamber profile and a special prechamber ignition system. Their objective was to improve every part of the engine to enhance its durability and performance. Perhaps the most eye-catching of the season’s changes was a new aerodynamic package to help generate additional downforce, enabling a higher cornering speed.

High-Octane uses a CAN bus to connect the car’s control units and log data. The ECU transmits all the engine’s main parameters, such as throttle position, speed and all fluid pressures and temperatures. Meanwhile, other sensors on the network provide information about wheel travel and speed, ride height, tire pressure and temperature, as well as inertia and position from a GPS module.

In the past, the team used a serial-over-bluetooth connection to obtain live data while testing on-track. However, this solution was very slow and often lost its connection, as the range for Bluetooth is too short for this application. This year, the High-Octane team wanted to switch to a CAN-over-wifi solution to access more channels and a longer range, so Kvaser supplied a BlackBird SemiPro HS CAN interface.

The team used the Blackbird CAN interface for on-track testing and occasionally during race events where the car remained within line of sight. Notably, the team is planning to build a bigger antenna for 2013 to improve signal transmission. According to Moritz Schumacher, High-Octane’s ECU expert: “The Kvaser Blackbird was a plug and play solution that improved our telemetry system a lot. We were impressed with how well the installation and setup functioned and how well the signal worked on our test-track.”

A Kvaser Leaf SemiPro HS was also used on the team’s engine test-bench to transmit real-time data for combustion analysis. Kvaser’s solution was selected for its high data throughput and easy to use drivers for the LabVIEW environment. Schumacher noted: “We worked with Kvaser virtual CAN Devices in Labview in the past and were very pleased with the driver support. This is also a reason why we prefer Kvaser!”

2012 was the first time that High-Octane participated in five events in one season. In May, they shipped the 2011 car to Michigan International Speedway in the USA for the biggest Formula Student event of the year, gaining 9th place overall out of 105 teams. In July, the team took the new car to Silverstone. It won 11th place overall out of 103 participating teams, thanks largely to its fuel efficiency. Events in Spielberg, Austria; Hockenheim, Germany and Györ, Hungary, followed. The latter saw them win first place in engineering design and come 3rd in endurance. As a result, the team is now in 17th place in the world ranking, out of over 500 Formula Student teams worldwide.

Work has started on a new car for the 2013 season, the FAUmax zeta. For the first time the team are building an electric racecar in parallel with their 6th combustion-engined car. Recounts Schumacher: “With the electrical car we are entering a whole new engineering field, but the combustion engined car will also get an update. First there is a monocoque chassis, instead of a steel tube space-frame. Secondly, we are removing the undertray to save weight. Instead, the wings will be a bit bigger to maintain the same downforce. And this season (2013) we are planning to go to Austria, Germany, Hungary and maybe Spain.”

We wish the team luck with its Formula Student challenges ahead!