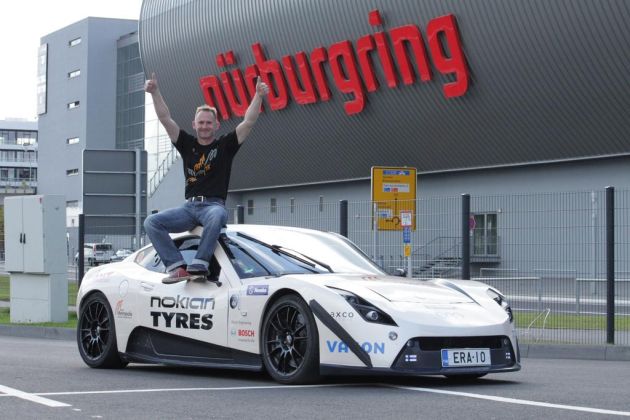 The ERA car is a ground-up design that adopts the latest technology in electric powertrain and battery systems, as well as light-weight manufacturing expertise. The object of the exercise is to create a state-of-the-art battery driven electric-vehicle that drives like a full-blooded sports car but has extremely low energy consumption and no emissions.

The ERA team installed a new Lithium Polymer battery pack in the car earlier this year, including a new Battery Management System (BMS) that was developed by Joonas Sainio as his Bachelor of Engineering thesis. According to Sainio: “During the development phase, we realised that we would need an external CAN-bus controlled non-volatile memory device to store values such as charged/discharged energy (kWh) and charged/discharged Ahs (AmpHours). This would allow us to keep track of how much energy and AmpHours had been used during the battery´s life, and during the project in general. Kvaser’s Eagle was a great solution for this purpose.”

The Kvaser Eagle was housed under the dashboard inside the ERA car and an external CAN datalogger was used to graphically present the information stored in the Kvaser Eagle, as well as store data from the car’s multiple CAN bus. Notably, the RaceAbout car has four CAN-bus: one for motor control; one for different kinds of sensors, chargers, vehicle control units, instrument panel; one for the car’s low voltage system; and one for the BMS-system. Some of the devices are also connected to two different CAN-bus at the same time. For example, the BMS-master uses an internal CAN-bus to monitor the battery and at the same time reports data to another CAN-bus to let other system devices know how the battery is doing.

Sainio used Eagle’s t programming language to control how the Eagle interacted with the battery management system, and a custom-built graphical user interface to help make sense of the collected data. The image below shows battery information stored within the Kvaser Eagle´s memory.

Explains Sainio: “The Kvaser Eagle acts as the system’s CAN-bus controlled memory. When the vehicle is “turned on”, the BMS-master requests all previous energy and charge data (shown in the image above) from memory. The data received during start up can be seen at the right side of the picture. Every 15 seconds the BMS-master sends refreshed values into the CAN-bus where the Kvaser Eagle captures and stores them.” He adds: “The Kvaser Eagle was an obvious choice because of the t-script capabilities of the device. This enables users to tailor the device to function exactly as they want. Previous experience of Kvaser’s USBcan II also meant that Kvaser was a natural choice for us.”

One of the many functions of the BMS is to tell the team to what degree they have charged or discharged the battery. More interesting still is the information on how many AmpHours and energy (kWh) the battery has processed in entirety. This is because, in future, these values indicate how much energy/charge was processed before a loss of battery performance was noticed, for example. From the total energy used it is also possible to calculate how much the discharged energy has cost. In the future, the can-bus controlled external memory will be able to store even more information, such as an odometer.

During the 2012-2013 season, the team installed many new components with the goal of setting a new record for street legal electric cars at the Nürburgring Nordschleife. Limited time on the track and slow battery cooling after hard driving sessions meant that the fastest lap they recorded was 08.23 minutes, but the team and the driver believe they could lap at under 8 minutes with minimal changes to the car. The new lap time is 20 seconds faster than Electric RaceAbout’s previous record, and just 27 seconds behind the fastest electric car in the same series (the Mercedes SLS-AMG Electric Drive), which is a real achievement. Congratulations and good luck to the ERA team for the 2013-2014 season.