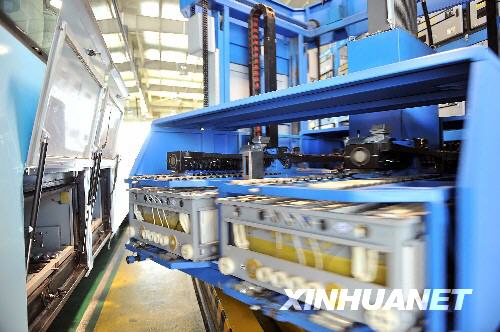 With the 2008 Summer Olympics and the Shanghai World Expo, China has recently played host to two of the best-attended events on Earth. The 2008 Olympic Games, which hosted millions of visitors and over 11,000 athletes, was hailed as a ‘logistical’ success, so it is no surprise to learn that planning extra support for public transport in Beijing started many years before the event.

Bearing in mind China’s stated goal of a ‘green’ Games that also supported scientific endeavour, China’s Ministry of Science and Technology commissioned Beijing Institute of Technology to develop 50 electric powered buses specifically for the Olympics. To support the project, Beijing City established an electric vehicle demonstration area within the city, in an area called Miyun, and as early as March 2003, a fuel cell bus demonstrator was running in Beijing.

Beijing Institute of Technology, which had already begun working on electric vehicle (EV) developments in 2001, worked in partnership with some 20 organisations to develop all the associated technologies for the Olympic buses, except the batteries themselves. The bus was then manufactured by local organisation, Beijing Jinghua Coach Co. Ltd.

As with any newly introduced technology – and especially for such a high profile project – an important aspect of the development process was the design of a post-production test system that would perform checks on the final product’s electrical system. Professor Nan Jin Rui, who led the team that developed the test system, decided to develop both software and hardware from the ground-up, having not found any well-adapted commercially available alternatives at that time.

Like most modern cars and buses, a controller area network (CAN) network has been employed as the vehicle’s underlying electronic information highway. So from a data-gathering point of view, it is simply a question of connecting the test system to the vehicle’s CAN bus network in order to gather the relevant test data. With a considerable amount of data requiring collection though, Professor Nan chose to use Kvaser’s four channel CAN/PCI interface boards in each test system to handle the task. Kvaser PCIcan 4xHS card, supplied by Kvaser Qualified Reseller BIT Tech, was chosen for its high quality and ease of use. The development team also used Kvaser’s CanKing, a general-purpose CAN bus monitor/analyzer which supports Kvaser’s CanKingdom, a CAN higher layer protocol.

In addition to all the usual mechanical checks that are performed on a conventional combustion engine powered bus, the electrical diagnostic tests need to assure the proper functioning of the battery, the AC/DC drive, the EV paddle that drives the generator, the motor drive and the motor controller – each test ensuring that the bus leaves the factory in optimum working order. Each function is tested one at a time, with lots of test parameters dedicated to battery management e.g. testing battery current conditions, battery charge mode and the low battery reminder.

The buses use Lithium-ion batteries and consume about 0.62 kWh/km, with a range of around 200km. A recharging station enables the batteries to be replaced with fully charged ones, although another type of EV bus design produced by the Institute employs a battery that is recharged in-situ (i.e. within the bus). The advantage of the latter is that it can achieve a higher range (approximately 300km) on one charge, but it has the disadvantage of considerable extra weight and a longer charge time, which is why replaceable batteries were chosen for the Olympic buses.

The buses, which were delivered well in advance of the Games commencement, were used to serve four major routes in the Olympic village in order to realise the goal of ‘zero emissions’ within the central area of the Olympic village. The main aim of the project, however, was to popularise the concept of electric buses within China’s public transportation network. And it is a goal that the project seems to have met, as a similar fleet of electric buses have been in use at the Shanghai Expo, plus Beijing Public Transport Company, and other major transport providers across China, have acquired hundreds more EV buses.

As for Professor Nan’s post-production test system, that too has had a life beyond the Olympics. Foton City Bus bought a set of test equipment and more recently, the software has been sold to BIT Tech (www.bit-emc.com.cn), which intends to commercialise it. Meanwhile, it seems that China, well-known for its super efficient mass transit systems, is fast gaining a reputation for its ‘green’ transit technologies too.

For more information on Kvaser’s CAN interface hardware and software, please visit www.kvaser.cn

Kvaser hardware takes the complexity out of data gathering for CERN