Debugging a collision avoidance application with the LEAF Light 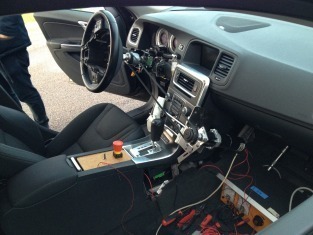 Collision avoidance is a critical capability in driverless vehicles, as well as vehicle trains or any kind of automated or semi-automated transport system. Hence it was that the Viktoria Institute, a Swedish research organization that acts as a bridge between universities and the business world, tasked a group of engineering students in their final year at Halmstad University to tackle the problem.

The development project specifically called for a system that would detect an obstacle at a distance of 10 metres from the car and then automatically maneuver it to the left to avoid it. The system the student’s came up with consisted of a PIC processor, GPS, a gyroscope, an ultrasonic sensor (the budget was too limited for radar), and a DC-motor, all linked by a CANbus communicating via CANOpen.

Kvaser provided a Leaf Light so that the students could debug their system. According to software developer Staffan Johansson, who was responsible for the CANopen development, the Leaf Light proved invaluable for debugging and testing the CANopen application: “We used it to check that the correct messages were sent on the bus, send messages to our nodes to see that they reacted as expected and to log messages so we could verify that the sensors were sampling at the correct frequency and that the commands for the maneuver were sent at accurate intervals.”

Extensive testing was done in the lab to make sure that all events would happen as planned and then a final test was carried out at a driving school on a test car on loan from Volvo. It worked! With just four months outside of lecture time to address the problem, the final solution had limitations that wouldn’t make it suitable for real world applications. However, the project gave the students a taste of the debug and test challenges ahead for real-world automated vehicles of future!

Finding faults before they happen with the Leaf Light