Shortening the Design Cycle to Serve Customers: New Eagle’s tools rely on Kvaser at their Core

Headquartered in Ann Arbor, Michigan, New Eagle’s team of engineers specialize in creating mechatronic controls: the electronic brains that drive mechanical systems. Some companies ask New Eagle to design and build their control systems and custom applications from start to finish, while others turn to New Eagle for high-quality software tools and volume production hardware. New Eagle’s Raptor platform provides the tools and controllers needed to create a reliable control system for the production of their client’s machines. Raptor provides the speed and flexibility of rapid-prototyping tools combined with rugged, high-volume production ECUs and displays.

New Eagle has partnered with Kvaser for more than 15 years. In the early days of using CAN bus in the marine industry, New Eagle used Kvaser rugged dual channel interfaces to reprogram ECUs. There is an ongoing history and legacy of partnership between New Eagle and Kvaser that really speaks to their synergistic relationship.

Problem: The gap between rapid controls prototyping and reality

Early in his career, New Eagle’s co-founder, Rich Swortzel, was an engineer for Delphi. Like many engineering departments, Rich and his colleagues would prototype controls in MATLAB / Simulink (the de facto engineering software for controls), which was designed to serve as a simulation engine.

First, the plant is modeled in the software. Then, the control algorithm is developed. Next, testing and tuning takes place in simulation, via parameters. Notably, all simulation has a measure of approximation, no matter how good the simulation engine. Lastly, testing continues until it works correctly.

Recounts Swortzel: “Other companies make hardware that allows engineers to take the graphic program model, hit “Go!” and then run it within the rugged PC in the vehicle. The throttle, inputs, and outputs are all physically connected to the real world, allowing the engineers to run the algorithm on the vehicle.”

This part of the process is very efficient: it allows the engineering team to fine-tune the vehicle in the real world.

Said Swortzel: “The problem is the next step – going from one ruggedized PC within a single vehicle to something ready for mass production … there is a huge gap there. There is high cost involved in producing just one piece of this hardware. The third issue is that this hardware is honestly not very rugged: put simply, a PC in a rugged case cannot handle a lot because it is not designed for harsh real-life environments.” 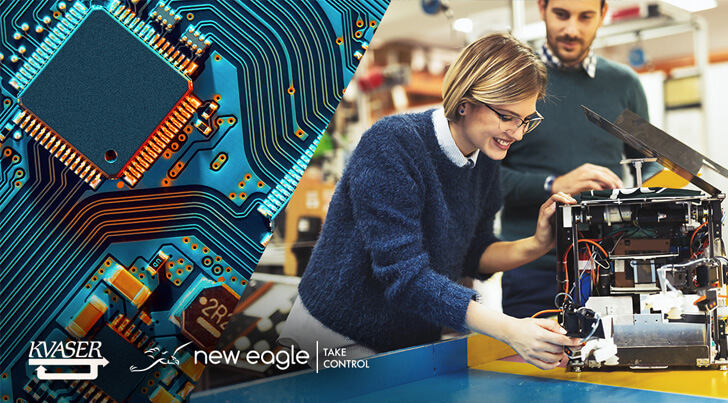 Finally, he sees another issue related to the design management: “To make this work, engineers have to convert this beautiful control algorithm into a specification document and ‘throw it over the fence’ to an embedded hardware and software team, who would then have to build it from scratch. This is a large reason why design cycles for vehicles can be as long as seven long years!”

The entire process is superbly inefficient. Rich from New Eagle got frustrated and said to himself, “Instead of downloading it to an embedded PC …wouldn’t it be great if we can download it to use in the production ECU and skip all the steps in between?”

And then, with his teams at New Eagle, Rich went on to help create just that.

New Eagle tools allows someone to compile directly from MATLAB / Simulink into Raptor, which auto-generates the C-code to be downloaded to the production ECU, via a Kvaser Leaf Light. In this way, Kvaser’s CAN tools help New Eagle simplify and shorten the customer’s design cycle.

For New Eagle, the whole goal is to move a customer into a scalable volume production, quickly. It does so, in part, by leveraging Kvaser’s products.

Lastly, New Eagle’s distribution arm (Supplier) is a reseller for a variety of products, including Kvaser’s products, as well as many ECUs, motors, and inverters. New Eagle’s relationships with major volume producers can help to unlock many products related to vehicle development.

“It’s pretty cool that in all these years using Kvaser CANlib (since 2005!!) I haven’t ever had to really get any support from your team, it just works.” – Ben, New Eagle

You can learn more about New Eagle and get in touch by clicking here, or visiting their site at www.neweagle.net.